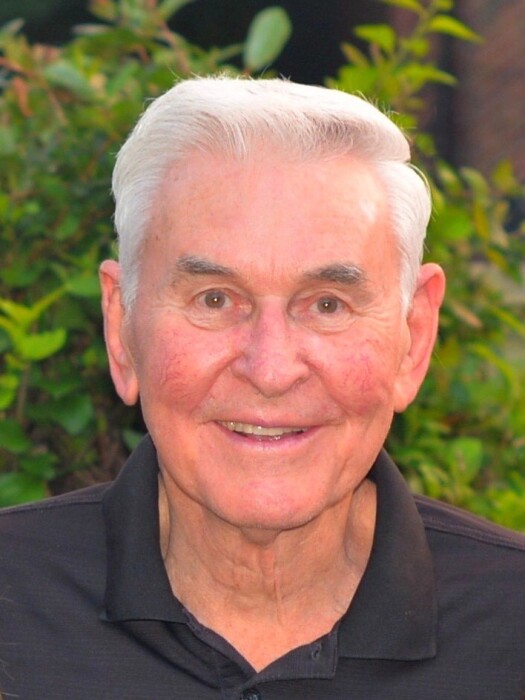 Valentine's service will be live streamed at 11 a.m. on Thursday, September 30, 2021 via the church Facebook profile at https://www.facebook.com/Blessed-Sacrament-Catholic-Church-Morton-Illinois-1621013384782666.

Born June 25, 1931, in Michael, Ill., to Valentine and Evelyn (Myer) Klunk, Val was one of 11 children brought up in a loving family, where he was affectionately referred to as “Sonny”.  He married Pat Simpson on December 28,1957, in Champaign, Ill.

He was preceded in death by his brother, Lee Paul Klunk.

After graduation from Greenfield High School in 1950, he attended Western Illinois and the University of Illinois majoring  in agriculture. He was a member of the Delta Sigma Phi Fraternity.  It was between Val’s time at WIU and U of I that he was called to serve his country during the Korean conflict. He was a member of the US Army’s 77th Airborne Special Forces Group.  Upon successfully completing his military obligation and continuing his college experience in Champaign, Val was introduced to what would become his lifelong occupation; the sales of home specialty products. He led the entire nation in sales for two consecutive years; earning him the title of Grand Champion for his employer (Wear-Ever a subsidiary of ALCOA).  His successes for the company resulted in recognitions that brought experiences of exciting travel for himself and Pat both in and outside of the US.  Val’s sales and sales management career continued for many years. As Val’s career progressed, he capitalized on an opportunity of fulfilling a dream of establishing his own company and Exclusive Home Products was born!  Retirement was not a concept that Val aspired for, as evident by him finding time to fulfill an order as long as he could put pen to paper!

It was while attending the University of Illinois that Val met the love of his life, Pat, who remained by his side for 64 years.  It is with much certainty that we believe that it was his love of his entire family and his relationship with Jesus Christ and his Catholic Faith that was most important of all.  His eyes would light up when any of his five children, 14 grandchildren, nine great grandchildren or his wife were present.

In Val’s later years, much fun and laughter took place during spirited board and card games; his favorite was Rummy.  His natural and good natured competitiveness never meant an easy go of it at the game table; ask Pat or any of his kids or grandkids; if you won you had to earn it! He was the most fiercely loving supportive family man and he always encouraged his family to strive to do their best while keeping their priorities straight. A charismatic man, who did not know a stranger. And if he met one, he would always introduce himself as February 14th (his name is Valentine) and they would end up instant friends. With an active sense of humor, at family events he could easily be found pranking the youngest family members. Val enjoyed the challenge of jigsaw puzzles, Sudoku and was an avid book reader and audio tape listener. Val loved his daily newspaper and cup of coffee and would often end his day enjoying some belly laughs while watching Johnny Carson with an occasional Scotch and water over a couple cubes of ice that he’d crack in the palm of his hand with the back of a large table spoon…fond memories indeed.  In his later years, we’d not dare think of touching the TV’s remote control during Wheel of Fortune; another sign that Val always liked activities to keep his mind sharp.  He was a lifetime Cardinals fan and looked forward to attending the Drake Relays, but of all of these extracurriculars, probably what ranked close to the top was his love of many hours of fairway time with his wife, Pat, family and friends on various golf courses and in his later years Pine Lakes.  The friendships formed, fun had, and dollars exchanged are probably too numerous to mention too were the golf balls Val would hunt and always successfully line his pockets with…often much to the chagrin of his playing partners…”Come-on Val the group behind us is going to hit into us.”

Val’s nearly 60 year membership at Blessed Sacrament Catholic Church.  He made many sacrifices to see that his children received a Catholic education. He was an usher, taught religious education, and when traveling with family would go out of his way to find a Catholic Church to attend Mass. This led to his and Pat’s involvement in many spiritual activities and his participation with the Cursillo Community, which was very meaningful to him.

Valentine, Val, Dad, Grandpa, Sonny, and Uncle Val will be greatly missed and there is no doubt in our minds he was welcomed into the loving arms of Jesus on August 23, 2021.

It was not unusual to hear one of us say to him I Love You'', and he would respond, “I LOVE YOU MORE” This is how we remember our Valentine.

A Mass of Christian burial will take place at 11 a.m. on Thursday, September 30, 2021, at Blessed Sacrament Catholic Church in Morton, with Msgr. Jerry Ward officiating.  Visitation will be from 4 to 6 p.m. on  Wednesday, September 29, 2021, at Blessed Sacrament Catholic Church, and also on Thursday, from 10 to 10:45 a.m. prior to the Mass, also at the church.

In lieu of flowers, memorials may be made to Blessed Sacrament Catholic Church Building Fund or Peoria Cursillo Community.

To send flowers to the family in memory of Valentine Klunk, please visit our flower store.
Send a Sympathy Card