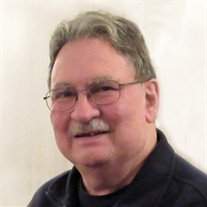 WARREN WAYNE BOLT
EAST PEORIA - Warren Wayne Bolt, 73, of East Peoria, formerly of Marquette Heights, passed away at 3:20 a.m. Mon., Oct. 1, 2018, at UnityPoint Health at Methodist in Peoria.
He was born Jan. 20, 1945, in Pekin to Obed Jr. and Geraldine (Finley) Bolt. He married Maria "Mary" Cantu on Nov. 16, 1968, in San Antonio, Texas. She preceded him in death on Nov. 11, 1983. He later married Aimee Desnoyers on April 26, 1997, in Normal, Ill. She survives.
Also surviving are three sons, Jeremy Bolt of Ballwin, Mo., Jonathan Bolt of Marquette Heights and Joseph Bolt of Cedar Rapids, Iowa; one grandson, Shae Bolt of Huntsville, Ala.; his mother-in-law, Margery Desnoyers of Toluca, Ill.; one brother, Leon (Cindy) Bolt of London Mills, Ill.; two sisters, Margaret (Bill) Wood of Springfield, Ill., and Alice (Frank) Curless of Washington; and many nieces, nephews and cousins.
He was preceded in death by one son, James Bolt, and one brother, Philip Bolt.
Wayne was a proud 1963 graduate of Farmington High School and a 1975 graduate of Bradley University.
He served with the United States Air Force from 1966 to 1970 during the Vietnam War and attained the rank of Staff Sergeant.
A 45-year employee of Caterpillar Inc., he retired in February of 2011 as a material control facilitator at Building KK in East Peoria. While employed at Caterpillar, he was a member of the United Auto Workers Local 974 in East Peoria.
He also was a member of the former Lions Club and Beautiful Savior Evangelical Lutheran Church, both in Marquette Heights.

Visitation will be held Friday, Oct. 5, 2018, from 1 to 2:30 p.m., at Knapp-Johnson Funeral Home and Cremation Center in Morton, followed by a funeral service at 2:30 p.m. Pastor Daniel Bishop will officiate. Cremation will be accorded following services. Private burial of the cremated remains will be held at a later date in Roberts Cemetery in Morton.

To send flowers to the family in memory of Warren Wayne Bolt, please visit our flower store.