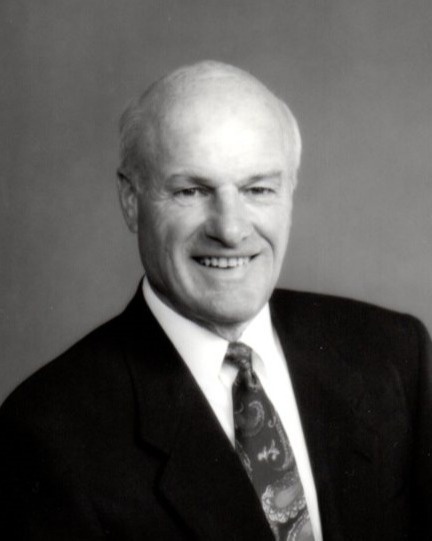 He was preceded in death by his parents, brothers, Edward (Bobby) and Eugene (Jill) Roecker and granddaughter Lanie Riddle.

Bill was a natural athlete, earning 15 varsity letters in baseball, basketball, football, and track at Morton High School. His mother required that in order to play football, he must also be in chorus…which he enjoyed less. He then went to Bradley University where he was a varsity basketball letterman and a proud member of the 1960 NIT Championship team.  Bill was a loyal Bradley supporter and enjoyed attending alumni events in both Illinois and Texas.

He met the love of his life, Bonnie Metz, at a small-town restaurant when he was introduced to her through mutual family friends. They spoke only briefly, but he knew he wanted to get to know her better.  She felt the same way.  When he got home, he wrote her a letter addressed with only her name, city (the wrong one nonetheless), and State – no street address or zip code – and somehow it was successfully delivered!  Bonnie was elated to receive the letter. Thus began a courtship that turned into a 60-year marriage. They lived out their marriage vows, as evidenced most recently by Bonnie’s selfless and faithful care of Bill during his Alzheimer’s journey.

After graduating from Bradley with a degree in building construction, he worked in that industry over 50 years, the first half with his brothers in Illinois and the last half in Texas.  Throughout his career and business ups and downs, he followed the principles of treating people fairly and “doing the right thing”.  He faced a particularly challenging period in the 1980’s with determination and fortitude, setting an example of faith and perseverance.

As a long-time member of Prestonwood Baptist Church, he served as a greeter for many years, a role he took very seriously. It was a perfect fit for his engaging personality, and he was determined to make sure that anyone who walked through the North Door Entrance felt very welcomed!

Bill was an avid golfer.  The game both delighted and frustrated him. He spent countless hours at the course, and played regularly until just a few years ago. The family would like to thank the Dirty Dozen golf group for allowing Bill to continue to enjoy the game well into his Alzheimer’s diagnosis.

A funeral service will be held at 10 a.m. Monday, October 3, 2022, at Knapp-Johnson Funeral Home and Cremation Center in Morton. Visitation will be from 5 p.m. to 8 p.m. on Sunday, October 2, at the funeral home. Further visitation will be held from 9 a.m. to 10 a.m. prior to the service on Monday, at the funeral home. Burial will take place at Hirstein Cemetery in Morton.

In lieu of flowers, please consider a donation to The Lanie Riddle Memorial Endowment Fund for St Jude Children's Research Hospital (https://mortoncommunityfoundation.org/riddle-lanie-endowment) or the Fellowship of Christian Athletes (fca.org).

To send flowers to the family in memory of William "Bill" Roecker, please visit our flower store.
Send a Sympathy Card